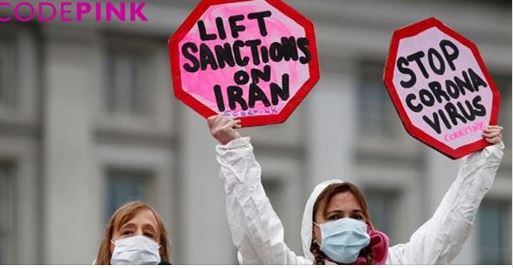 Perhaps Donald Trump couldn’t give a damn about their letter because they are all Democrats, and some of them are „special friends“ of Trump. But what about Joe Biden, the most likely contender of Trump. Being asked at Meet the Press, Biden replied he doesn’t have enough information. This answer is typical for Biden, who acts like a political moron who has a memory defect.

Information is on the table. Trump’s deadly sanctions strangulate the country and will lead to hundreds of thousands of deaths in Iran, such as the Bill Clinton’s sanctions on Iraq led to the end of 500 000 children, which then-Secretary of State Madeleine Albright thought it was worthwhile. US foreign policy is not run by Trump but by Pompeo, Netanyahu, and killer-in-chief Mohammed bin Salman. In light of the corona crisis, they are planning a war against Iran.

Why doesn’t the European Union lift the sanctions on Iran or Germany? These countries would be real sovereigns. They could do it, but they are all vassals of the US Empire and under the boot of Donald Trump. Why don’t they accept that Trump can sanction one-third of the world’s countries without any resistance? For Germany, it’s not surprising. Germany has been a US colony since the end of World War II. The reunification hasn’t changed a thing.

No less a figure than former Finance Minister Wolfgang Schäuble said at the Frankfort Banking Congress on 18 November 2011 that Germany is not sovereign and has never been since the end of World War II. Schäuble’s remarks on sovereignty didn’t get much attention in the mainstream media because they all go for globalization. Independence is anathema for them.

Coming back to sanctions relief on Iran, only one representative of the German Bundestag, Armin-Paul Hampel from the Alternative for Germany (AfD) called for it. Still, it didn’t find any resonance in the media. Hampel also calls for the end of sanctions against Russia. Where is the German left?

Not only under the current Corona hysteria, but Trump’s sanctions policy should also be beyond the pale for all countries. The only leaders who resist Trump’s bullying are Russian President Vladimir Putin and Chinese President Xi Jinping. All the others are pawns.