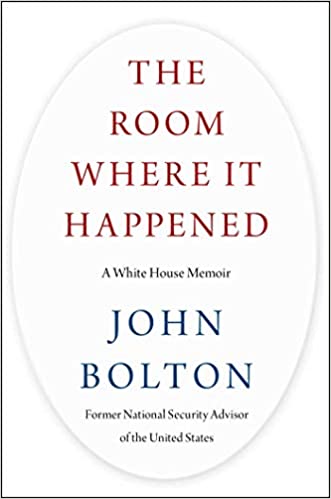 Is it just another lousy job?

The title of John Bolton’s revenge insinuates highly explosive internal affairs by a guy who’s, besides the Chief of Staff, the most important person besides the President in the White House. John Bolton was President Donald Trump’s Adviser for National Security from 8 April 2018 until 10 September 2019, where Trump fired him. The question arises why Trump took Bolton in the first place.

When President-elect Donald Trump was in the process of forming his team, John Bolton also begged for a job. The reason why Trump didn’t want him was his Stalin-like mustache. There would have been a better reason why Trump should have dismissed Bolton. Everybody in Washington D. C. knew what kind of hawk Bolton was. Bolton stands for military strength and war to get America’s will.

Ideally, the National Security adviser serves as a go-between and honest broker of various policy options on national security for the President. Bolton, however, was an advocate of his political agenda. Several times, he thwarted and sabotaged Trump’s policy. Bolton derailed Trump’s rapprochement towards the North Korean Chairman Kim Yong-un by saying the „Libyan model“ can be applied to North Korea, too. He opted for regime change in Venezuela. And together with Israel’s Benjamin Netanyahu, he was for war with Iran.

What Iran was concerned about, Bolton was much closer to Netanyahu than his boss, who talks big but doesn’t want war, unlike his predecessors. In the Syrian case, Bolton, together with military hawks torpedoed Trump withdrawal from Syria, again with the support of Netanyahu. It seemed Bolton was more concerned about the security of Israel than of the United States of America.

Why Bolton got the job anyway, were his very close ties to the Zionist Israel lobby, especially Sheldon Adelson, Casino magnate and Billionaire from Las Vegas. Adelson would not negotiate with Teheran but would threaten them with an atomic bomb. Adelson donated over 20 Billion to the Trump campaign and bribed Bolton into the White House, according to Washington insiders.

Bolton presents a chaotic President who embraces America’s enemies and spurns friends and was deeply suspicious of his government. According to Bolton, all this helped put Trump on the bizarre road to impeachment. As a result, the US lost an opportunity to confront its deepening threats, and in cases like China, Russia, Iran, and North Korea ended up in a more vulnerable place, writes Bolton.

Excerpts from the book were leaked to the press to boost the number of sales. Bolton pretends that Trump is easily influenced by foreign leaders, especially strongmen and presumed dictators. Vladimir Putin’s spokesman, Dmitry Peskov, rebuked this claim by saying that Putin can’t play Trump „like a fiddle“ and that the US President can’t be manipulated.

According to Bolton, Trump asked China’s President Xi Jinping to help his re-election chances by buying more American soybeans and wheat. Trump supposedly agreed to the establishment of concentration camps for Muslim minorities. In the bilateral discussion between the two leaders, only interpreters were present. So much for „The Room where it happened.“

The question arises why didn’t Bolton testified in the impeachment hearings and later criticized the Democrats for getting the impeachment wrong? Before the Senate, Bolton could have said that Trump is unfit for the job. But now, after he got fired, throwing dirt at Trump contradicts all rules of fairness.

The Trump administration wants to prevent the publication of the book due to national security reasons. Besides the legal battle, Trump and his Secretary of State, Mike Pompeo, hit out against Bolton. Pompeo called him a „traitor.“ „I’ve not read the book, but from the excerpts I’ve seen published, John Bolton is spreading several lies, fully-spun half-truths, and outright falsehoods.“ Pompeo’s reacted immediately because Bolton quotes Pompeo, had scribbled on a piece of paper that Trump „is full of shit.“ Trump called Bolton a „washed-up guy“ who broke the law.

The White House staff gave the book the go-ahead after having checked it of sensitive national security concerns. Perhaps Bolton thinks he can prevent Trump from winning a second term, but whether a book will make such a difference is somewhat questionable. As it seems, the book contains a lot of lies and many state secrets. The judge has to decide between the First Amendment and state secrets. On 20 June 2020, the judge ordered the release of Bolton’s book.