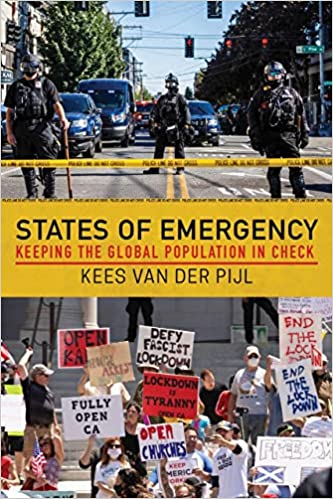 Kees van der Pijl has written an extraordinary book on the natural causes of the COVID pandemic and its exploitation by the global elites to control the world’s population and establish a totalitarian regime run by the globalists. Since the pandemic’s start in March 2020, lockdowns have been used to restrict democracy and people’s freedoms.

In a digital economy, two billion people will be superfluous, and they are not sitting on their hands; the world over, massive resistance has begun, writes the author. „The Western capitalist elites have lost the capacity to engage their respective peoples in an equitable social contract and have resorted to stoking fear — from the terrorism scare and the Russian threat to the COVID infliction, with more variants coming in line — as a formula for curtailing protest and maintaining power.“

The US national security state and its intelligence apparatus, the IT giants, spun off from it, and the extensive media conglomerates that have joined forces to create a comprehensive surveillance system of Orwellian dimensions, which the globalists use as an ideal oppressive tool. „In October 2019, just before unleashing the „pandemic“ on the world, what was about to happen was first tested in a simulation. The participants were: the Bloomberg-financed Johns Hopkins Center for Health Security, the Gates Foundation, the World Economic Forum, the CDC, the (American trained) head of the Chinese health authority, a former deputy director of the CIA, Johnson & Johnson, Pfizer, and so on,“ writes Paul Craig Roberts on Information Clearing House.

And Roberts continues writing: „The participants were primarily concerned with protecting the planned deception from being exposed. They relied on social media and the presstitutes to control the narrative and censor the truth. They considered whether to close the Internet altogether. Still, They were assured that Twitter, Facebook, YouTube, and Google would only allow news in keeping with the narrative and flood the Internet with information that confirms the narrative while discrediting and blocking the truth.“

The participants pretended they were playing a germ game, but the simulation ensured that all was in place to control the explanation before the release of the pandemic. It seems as if the „pandemic“ was unleashed deliberately and kept running by different variants. Just recently, Bill Gates announced that a much worse pandemic is coming.

Kees van der Pijl’s book is the first serious analysis, which can’t easily be labeled a „conspiracy theory.“ To derail this nefarious plan is the most critical task facing humanity.