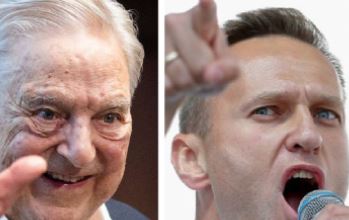 Navalny and his instigators.

From the start, the alleged Navalny poisoning was riddled with contradictions and should have raised eyebrows by every politician and journalist.  Being discharged from the Charité Clinic in Berlin, Navalny went into attack mode against President Vladimir Putin. As it seems, this will be his role designed to him by the intelligence agencies. In a couple of days, the Navalny hype will be over. One can only blame Putin for the alleged poising once. If Navalny had the guts, he would return to his homeland and fight Putin politically.

The whole poisoning hoax stinks to high heaven. If Navalny would have been really poisoned, he and his companions, not to speak of all the other passengers in the plane, would have been poisoned too. None of them was. What a surprise? His „poisoning“ was of the same sort as the one of the Spripals. There was nothing. Since their recuperation, they have disappeared. Are they still alive?  The fooling of the public works only once, and the British MI5 has a long history of leading the public astray.

There are further inconsistencies in the case. Navalny’s backers even found water bottles in his apartment, which were allegedly also poisoned. How could they bring them openly to Germany? How could the whole Navalny entourage travel to Germany without any restrictions, especially under Corona restrictions? They could even go back and force. By the way, Navalny was apparently poisoned drinking a cup of tea before boarding a plane, which he would take him to Moscow. The plane had to make an emergency landing because Navalny started screaming on board. But the pictures of these incidents seemed staged and unrealistic.

After the landing in Omsk, Navalny was medically treated. Russian doctors found nothing special. All of a sudden, Navalny’s entourage claimed that he should be brought to Berlin. Why Berlin? Why not France, Great Britain, or the United States? As it turned out, the Navalny case’s fallout was the killing of the Nord Stream 2 pipeline. The first one among the political class to call for an end to Nord Stream 2 was Norbert Röttgen, a mouthpiece of the trans-Atlantic network, severely anti-Russian as another Russophobe German politician Katrin Göring-Eckardt called for a stop to the pipeline. When it goes against Russia, the Greens are at the helm.

Although the Russian government offered his cooperation and demanded proof of the alleged poisoning, the German government did not provide any hard evidence. They pretended it had sent them to the Organization for the Prohibition of Chemical Weapons (OPCW) in Den Haag/Netherlands, but the organization referred the Russian back to the Germans. So far, evidence could not be provided by the Germans, besides rumors.

The stop of Nord Stream 2 would damage not only German national interest but also the Russian one.  Canceling the project, Germany would have to pay Billions of Euros compensation to the companies, and Germany would lose every credibility as a serious trade partner. Over a year, U. S. President Donald Trump has been putting enormous pressure on the German government to cancel the project. Instead, Germany should buy expensive U. S. fracking gas. If the Germans succumb to U. S. blackmail, it will demonstrate to the world that Germany is still a U. S. colony and not sovereign.

German foreign minister Heiko Maas cut the worse figure. He is the main agitator against Russia. Maas used his video speech at the United Nations to attack Russia to deliver „evidence“ of the Navalny’s poisoning. Russia can’t contribute anything to it because Navalny wasn’t poisoned. Since Maas was appointed to his job, anti-Russian rhetoric increased. Together with other politicians from the Christian Democratic Party and the Greens, Germany follows a hostile policy towards Russia. The German side refused to answer three letters of Russia’s request to provide evidence of the „poisoning.“ Maas seems to have a complex about his childish appearance. Perhaps that’s why he behaves like a snip. If Angela Merkel lets Maas go on like this, the German-Russian relationship will be completely screwed up. A long tradition, established by former Chancellor Willy Brandt and his adviser Egon Bahr will go down the drain. Only the U. S. will profit from such a deterioration in relations.