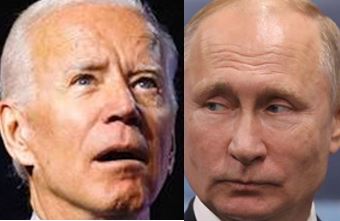 The Biden/Harris regime pushes the nonsense that determined the so-called Russia gate, which was totally fact-free. The reports on the alleged bounty for the Taliban to kill Americans hail from the devil’s workshop of the CIA. The so-called cyber espionage by Russia is of the same sort. The same holds for the alleged Russian involvement in an explosion of a Czech ammunition depot in 2014 linked to two Russian agents who supposedly were involved in the „poisoning“ of the Skripals in Salisbury/England. This hoax was made public after the Biden regime announced sanctions against Russia for alleged meddling in the 2020 elections. Czech President Milos Zeman uttered his surprise that nothing had been mention in the Intel reports since 2014, not even in the secret parts. Now, Zeman faces charges of high treason for telling the truth!

Maria Zakharova, the spokeswoman for the Russian Foreign Ministry, made it crystal clear that Russia is prepared and will react swiftly should the Biden regime or its docile European appendices will further sanction Russia. The European Union thinks it could sanction or lecture a self-aware sovereign Russian state like its dependent colonies like Panama or Costa Rica. The European Union lacks self-respect and self-consciousness because of its US vassal status and its lack of democratic legitimacy. As long as they don’t free themselves from US paternalism, the sovereign state won’t take them seriously. It was a great amusement how Erdogan put EU Commission President Ursula von der Leyen on a sofa on an equal footing as his foreign minister!

One should remember Josep Borrell’s visit to Moscow, where he wanted to lecture Russia on human rights, especially on the treatment of Alexej Navalny. Borrell holds the foreign policy portfolio of the EU. Russian Foreign Minister Sergej Lavrov told him to take care of Julian Assange and not intervene in Russia’s internal affairs. Lavrov further told Borrell to be more concerned about the treatment of Catalans by Spanish policy and not so much about the treatment of a few hundred pro-Navalny protesters. Borrell looked like a drowned rat and departed. Back in Brussels, the Commission released a bombastic statement of hot air.

The Chinese are also fed up with the US child’s play. Tony Blinken got snubbed when meeting with a Chinese delegation in Anchorage/Alaska. Blinken lectured the Chinese on various issues, especially the treatment of the Uyghur minority and Hong Kong. It seems as if the Chinese delegation had waited for an opportunity to teach the arrogant American delegation a lesson of diplomatic behavior and history. Before the US lecture other sovereign nations on democracy, human rights, or democracy, they should look in the mirror. The image the US presents to the world is chaotic, to say the least. And they are establishing a police state and a totalitarian regime.

Up until now, it’s not clear whether the 2020 elections were „free and fair.“ Many claims of massive voter fraud and manipulations are unresolved. Besides all State Courts, even the Supreme Court didn’t take up the case, although it would have been a classical case dealt with before the Supreme Court. Doesn’t the Supreme Court deal with other, much less important questions that don’t concern the US constitution? Each democratic country should be alarmed about the anti-democratic developments in the US.

Domestically, the Biden/Harris regime started a purge not only on the people who marched into the Capital on 6 January. This expression of people’s power was terminated as an „insurrection.“ The US-instigated much more violent protests in other countries such as Ukraine, which ended in a putsch against a democratically elected President. With the whole might of the Intelligence apparatus, the FBI, and the DOJ, the Biden regime is prosecuting mostly poor people who voted for Donald Trump. What’s disturbing is the mainstream media’s attitude, who are in lockstep with the government against „deplorable“ America. The Hollywood and the East Coast elites despise the hillbillies of Heartland America. What only happens in totalitarian regimes, the media protect a regime from any criticism by not reporting or blatant censorship, such as the Big Tech corporations are practicing against any opinion, which doesn’t conform with their wokeism and support of cancel culture. Government press releases are published with minor inputs by these „journalists.“

The purpose of Blinken’s second visit to Europe is to render support for the Russo-phobic American policy. At his first visit to Brussels, Blinken pressured the EU not to buy the Russian vaccine Sputnik V. It‘ not surprising that the European Medicines Agency (EMA) protracts the approval of Sputnik V. Also, Brazil has been pressured not to take the vaccine, although already 64 countries in the world are using it. The efficiency is over 97 percent. The death rate is 1 to 100.000 vaccinated. All other vaccines have much higher death rates. How long do the European states want to poise in the vassal status of the US? They should part from the US; otherwise, the US will lead them into another war over fascist Ukraine.

Especially Germany is in the hot seat because of Nord Stream 2. Blinken announced that he would „convince“ German foreign minister Heiko Maas to back out of the deal. There is a large „fifth column“ of Atlanticists in Germany who call for a stop to the pipeline project in Germany. The most prominent is Annalena Baerbock from the Green Party, who was named chancellor candidate. Other German politicians who work against German national interests are Alexander Graf Lambsdorff (Free Democratic Party) and Norbert Röttgen (CDU), to name just a few.

The most Russophobe and war-prone Party, however, is the Green Party. They are human rights fanatics and would go to war over Ukraine if the US does the fighting. Their motto is: „Let me have my cake and eat it, too.“ After their field of experimentation in Afghanistan after 20 years of indoctrination failed, the Greens are looking for a new playground. The godfather of the Green Party, Joseph Fischer, pioneered the war of NATO aggression in the destruction of Yugoslavia by playing the Auschwitz card.

After the collapse of the Soviet Union, NATO transformed into a tool of US aggression against countries, which could not defend themselves, such as Afghanistan, Iraq, Libya, Syria, or Yemen. Now, the US tries to take on Russia and China. Instead, to return to classical diplomacy, the US behaves like a bully and orders submission, which won’t work. The US is the biggest violator of international law. They are using platitudes such as „value-driven“ policy, which doesn’t mean a thing. Values are variable and highly volatile. Instead of catching up with reality, the Biden/Harris regime seems as if it picked up where Obama left off without realizing that the world has changed dramatically, which doesn’t seem to have got around until Washington.